Made in Germany. Worth every cent ... 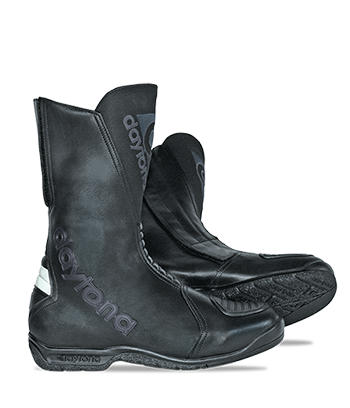 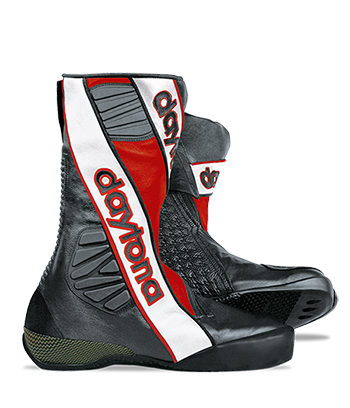 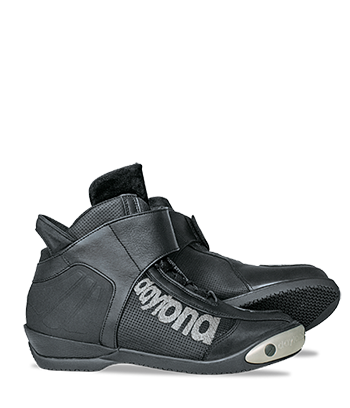 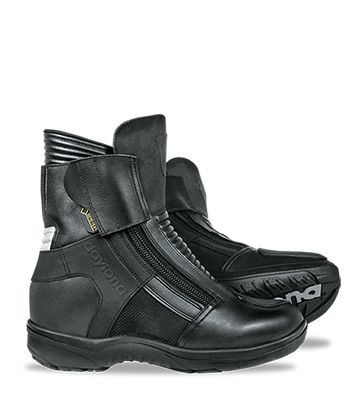 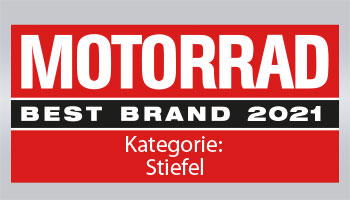 MOTORRAD readers have voted the Daytona brand "Best Brand" for the 16th year in a row. Daytona's advantages are obvious. At brothers Reinhard and Helmut Frey, the entire business is focused solely on boots and nothing else. Customers praise the products' waterproofness, safety, wearing comfort and, above all, durability. Production takes place in Eggenfelden in Lower Bavaria. Each boot consists of over 120 high-quality individual parts and is meticulously assembled by hand. 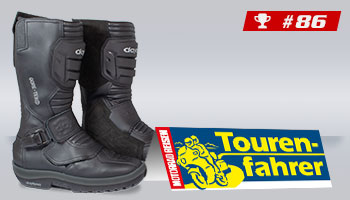 "Soft enduro boots should provide optimum protection in the event of a fall, allow good contact with the motorcycle and also offer the comfort of a hiking boot. These were the expectations during the test of the Zeitschrfit TOURENFAHRER. Eight waterproof Enduro boots were tested intensively. The daytona TransTourMan GTX received the best rating and was and is the only boot tested that received a recommendation. The conclusion of the testers: "Offroad-suitable touring model with optimal entry level, superior safety features and excellent insulation. 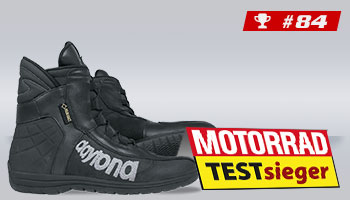 The magazine MOTORRAD has tested 13 short sheep boots. To find out if comfort and protection can be combined. The Daytona AC Dry GTX has been awarded as test winner: "The Daytona AC Dry is heavier than the competition – that's the only point of criticism. In practice, this is not at all noticeable, it even feels rather light. The most expensive boot in our test is very close to "perfect".

Read all awards and recommendations

The current winner of the month:

Dear Daytona team! As a late (up) bloomer in 2012 I made the appearance, tried several new and used shoes(!) and finally landed at the bagged Evo Sports a few years ago. A short episode, why I probably did everything right: Race track training June 2019 with my a little bit old 97'er Bandit at the Hockenheimring, weather fits, asphalt sticks, Suzi shoots, exuberance rises, curve comes, detent grinds, exhaust clamp says goodbye, boots takes ground sample, screw of the grinder does the same to the clamp, but the foot remains intact! Your quality standards plus customer service: simply phenomenal! Thank you and best regards
Werner Grabowatschki, Germany 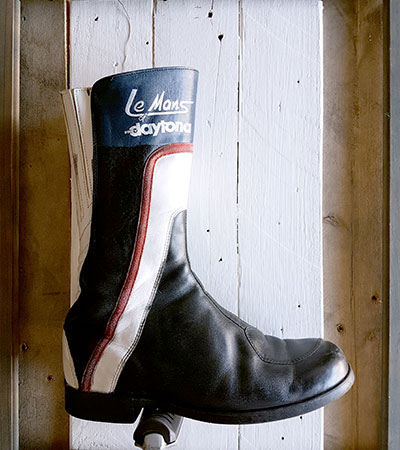 20 years of extreme use

I've had my Daytona Touring Star GTX for 20 years now (+ - ). I bought them at the Louis Fiale in Bremen. They passed the first rainy ride of 600 km with flying colours. Countless 10,000 km followed with the boots all over Europe. They have never let me down on the moped tours. After 20 years of extreme use, they had to go to my trusted cobbler last winter. They got a new sole and the shifting reinforcement on top of the boot was renewed and 2x new insoles original from Daytona. Unfortunately I found out too late that you also repair boots in your shop. I'll probably take advantage of that again and have you glue the original gearshift reinforcement onto my boots. I've often worn new Daytona boots at Louis because they are no longer 100% waterproof, probably because of the membrane. But once they've been treated with BW shoe polish, they're watertight again. Should I really need new moped boots, I will buy them again because they are simply TOP. Best regards Frank & Tanja Suhrhoff, Germany 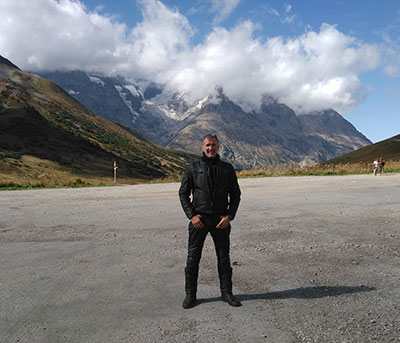 After half an eternity like on the first day

Richie Rieke from Linden sold me my first Daytonas (VOYAGER GTX) half an eternity ago: "Something new, you'll like them." True words, because they are as tight as on the first day, keep warm and if I hadn't finally outgrown size 45, my mile boots would still come along on tour. Now it will probably be the TransTourMan GTX in 47 for the charity tour through Scandinavia :-) Lars Lepper, Germany 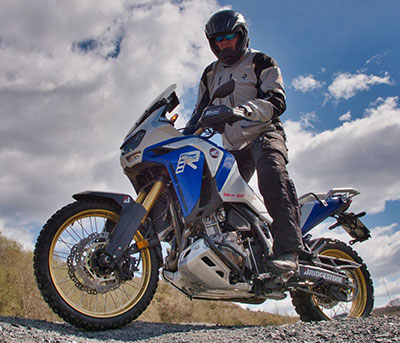 Am 2018 after 11 years of motorcycle abstinence back in the saddle (R1200RS) and for this the 30 years (!) Old Daytonas were brought out of the basement. And now they begleid(t)en me on the third Alpine tour. Helmut Zeitter, Germany 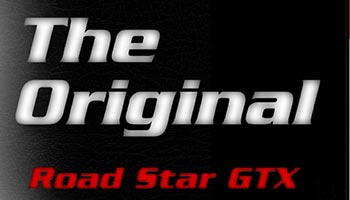 Often copied, never equaled and worth every cent.

The Road Star GTX is one of the most copied motorcycle boots in the world. But the copies don't come close to the original. And the original is only available from daytona. Extremely high quality and comfortable, awarded 14 times and worth every cent.
more information on Road Star GTX 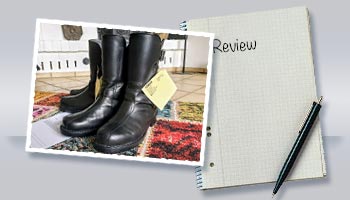 When good things happen to you...

Frank Wintzen from Schwalmtal was so enthusiastic about the fact that his old boots, used on countless trips, came back from the "inspection" "almost as new" that he published a little story about it: 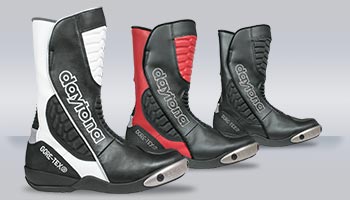 Tried and tested ... and graded with a smooth 1

An editor of the magazine "ps sport motorrad magazin" tried out the Daytona Strive GTX: "This boot has grown close to our hearts. Of course, he is not the safety giant like the racing athlete Evo from Daytona. But the great, because sporty everyday boot is also suitable for the fast tour on the country road and has a waterproof Gortetex membrane that really works. After almost two years in continuous use, the Strive shows no signs of fatigue - neither on the zipper, nor on the leather or sole. "And he can still shine in any rain." The editorial staff evaluates according to the school grading system and has awarded a 1.

more information on the Strive GTX 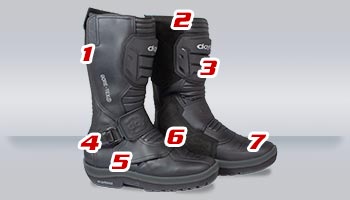 All those who like it sporty will find a partner for their adventures in TransTourMan GTX. The travel enduro with the cross genes comes off-road. Nevertheless, you don‘t have to forego comfort: waterproof and breathable, with well padded, solid protectors and clever details such as exchangeable wear parts or the super comfortable entrance, for which zipper and Velcro have been combined. 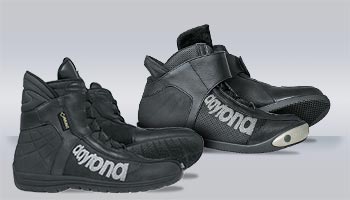 The quality impression is superb

The magazine MOTORRAD NEWS has listed two Daytona boots in a market overview for short boots.
The Daytona AC Dry GTX is a ... "Everyday hero: With a Gore-Tex membrane, the AC Dry is also suitable for wet and cold days, yet it is vapour-permeable in summer weather. Running comfort 9/19".
The Daytona AC Pro is a ... "Café-Racer: The AC Pro is aimed at sprinters with titanium grinding wheels. The quality impression is superb with both Daytonas. Running comfort 9/10". 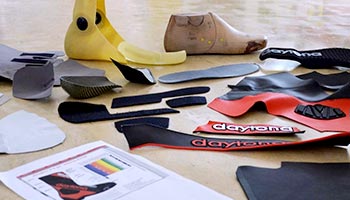 Daytona custom-made boots - a look behind the scenes

An editor of the Web-Magazine "1000 PS" visited daytona and had a new motorcycle boot made-to-measure for him and took a look behind the scenes into production.

You can find his report here. (in German)

Sara "The Peach" Pedersen and her husband Daniel "Big D" Pedersen are driving around the world with their bikes. It's been two and a half years since their journey begann, five years still ahead on them.
Recently they made a stop at daytona Eggenfelden to have their boots resoled. Check www.worldwideride.ca to follow them on their tour.
In the picture, from the left: Big D, Berta Frey (daytona), The Peach, Reinhard Frey (daytona) 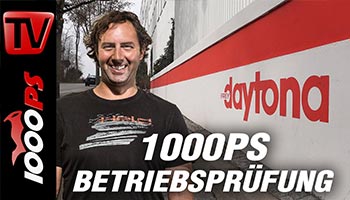 "Factory test" by the 1000PS editorial office: "Why Daytona boots save lives"

Test editor "Vauli" from the 1000PS team was at Daytona in Eggenfelden, to the production of a "factory test".
His impressions and insights are documented in a video.

Create your Security Evo G3 with the Configurator

The racing-boot can adapt perfectly to the outfit of driver and machine. Read here how you order your individual Security Evo G3. Colour your own boot - you have the choice! 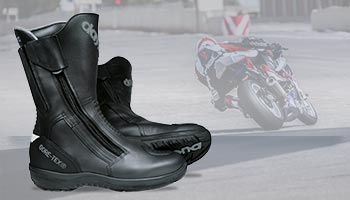 Daytona Are The Daddies At Making Motorcycle Boots

The FAST BIKES MAGAZINE writes:
"Simply put, Daytona are the daddies at making motorcycle boots. They're not distracted by manufacturing other kit, so are devotet to bringing you the ultimate in safety. Many racers sacrifice paid contracts just to have Daytona's top-quality product. Usually top end on price but clearly top-end in results, too. Warming your tootsies from the kings of safety are the new Road Stars - not the sexiest jiving boots, but packed full of protection and assurance with their patented inner/outer booties."
more information on Road Star GTX 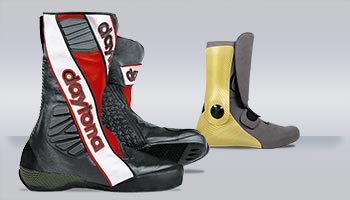 Daytona Is The Ferrari Of The Boot World

And another report of the FAST BIKES MAGAZINE:
"You need top-to-toe coverage when you're out and about on a bike, and nothing protects the toes better than this lot. An often heard quote is that if racers weren't paid to wear boots, they'd all wear Daytona. And that isn't so far from the truth, going by what we've been told about on facebook by countless racers over the years.
All the racers that do wear them, ususally have to pay for the privilege. Daytona is the Ferrari of the boot world in this case, and it's a mantle well deserved. The Security Evo III is the ultimate expression of this safety-shell-boot-philosophy." 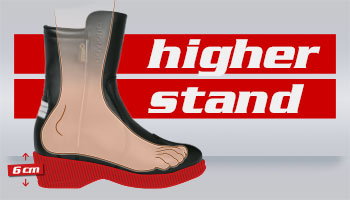 daytona® has developed special motorcycle boots for smaller female and male bikers. A combination of an internal heel elevation and a higher sole makes these boots 6 cm "bigger". With the higher stand you reach the ground easier when stopping, you stand more secure and you can support the motorcycle better. 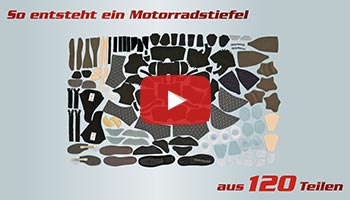 Manual work. Worth every cent.

How a daytona® boot evolves from around 120 individual parts.

If you have all the components of one of our motorcycle boots in front of you, it almost looks like an insoluble puzzle. But our 130 specialists in the production know exactly what belongs together and how. After 80 working steps they have processed everything into a new genuine daytona® motorcycle boot. One of about 70,000 pairs of motorcycle boots, that we deliver every year.

The new video from the production shows many of the steps that are necessary to make motorcycle boots with maximum safety, perfect fit and long durability.